"The limited popularity of the American Water Spaniel restricted development, resulting in the breed being relatively unchanged since its origins in the 19th century."

The American Water Spaniel, or AWS, is a fantastically beautiful brown hunting dog. Ask people to think of a hunting dog they have seen in the past, and chances are this is one they will know of and remember. Here, we will tell you all about the AWS breed. We will give you more information about the breed’s history, appearance, temperament, the ring standard for this breed, health issues many AWS puppies may face during their lives, and more. Hopefully this article will help you to decide whether or not the AWS might be the right sort of puppy for your family or household.

The origins of this breed is somewhat murky. Some say it originated in the Midwestern United States. Other say it originated in the Great Lakes Region. Most agree that it did originate along the banks of a particular river in Wisconsin, which is why it is the state dog of Wisconsin. Either way, these dogs were specially bred to hunt waterfowl in the cold temperatures up north. From the time of the early 1800s to the modern period after World War II, the numbers of this dog breed begin to become fewer and fewer. Fred J. Pfeifer is credited with saving this breed by starting specialty kennels that offered the dogs at bargain prices. It was not until the 1940s that the breed was recognized by the American Kennel Club.

AWS dogs have curly, thick, brown coats. Their coats are water resistant and have two layers. The first is to keep water off. The second is to keep them warm. Size wise, American Water Spaniels are a medium dog. While some of these dogs have coats with tight, neat curls, other have wavy coats. Most owners comment that the coat of their AWS dogs feels a bit oily, which is natural, and may smell a bit. Eye color should match that of the coat. Owners allow the tail to hang long. You can also recognize this bread from their long, floppy, hairy ears, as well as their typically wide skulls.

Normally, AWS dogs will latch on to one particular member of a home. They can be noisy and love receiving their due amount of attention. But they are very talented hunters, and can swim for very long periods. Unlike some other hunting breeds, AWS dogs enjoy being around children. Without proper training, this dog will remain a bit stubborn. At one time, AWS dogs were raised in packs. This can be good if you are looking for a dog that will do well with other dogs. Care must be taken, however, that the AWS does not try to become the alpha dog of the pack if they are kept with other dogs. Despite their curly coats, AWS dogs are not hypoallergenic.

When it comes to training, you will want to switch up training with this dog. Do not run just drills with them. Because of the special type of coat that this dog has, you want to be sure to give them a god brushing at least once per week. Take special care to check their ears while you are doing this. If looking to trim the coat, do it only from the feet and the topknot. Your AWS dog will also require quite a bit of exercise. Take them on at least one long walk each day. If you do this, you can even keep them in smaller houses or apartments.

Ring standard for this dog is related to their original purpose. They should appear muscular, but not clumsy. Their legs should be very parallel when viewed from behind. When describing the look for the ruing standard of the AWS, the words power, drive, and strength come to mind. Coats can be tightly curled or not. They may also be trimmed or not. Females should be slightly smaller than males, and both sexes are a bit longer than they are tall. The only thing to disqualify this dog from ring showing is yellow eyes. Proper coat and proportions of the body are the most important thing with this breed.

The AWS can have potential issues with its hips, heart, and also eyes. Mitral valve disease, a heart issue, is probably the largest concern. The second largest concern is the potential for hip dysplasia. If you are worried about any of these issues, just bring them up with your vet. Cataracts can occur after the first birthday of an American water spaniel puppy. Progressive retinal atrophy can also occur. Some dogs might loss hair due to other issues at around half a year old. Expect your healthy AWS dog to live between a decade and around 13 years. 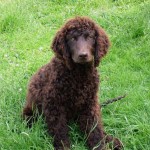