Color:Typically white with combination of black, brindle, and/or seal

The Boston Terrier is a short dog with erect ears and a short snout. Their faces are wrinkle free. They typically weigh in between 10-25 lbs being no less than 10lbs and no more than 25 lbs. They have short tails and a smooth coat. Their coats usually have a proportion of white with either black, seal or brindle coloring.

This American Breed of dog has an even temperament. They are eager to please which makes them highly trainable. They are a bit stubborn when it comes to training so consistency is imperative. They have been known to be very protective of their owners and can become aggressive when they feel that their owners are being threatened, unfortunately the threat can be other family members!

They usually use good sense when it comes to barking and only bark when they feel a threat. They can be great members of the family and will get along with other pets under the right circumstances.

Their small size and their sensible tendency to bark only when necessary makes the Boston Terrier an ideal choice for apartment style living. They do enjoy regular walks with their families. They are not hyper active as so many smaller breeds are. They are easily content so they do not require constant attention.

Their shiny short haired coat does not require a lot of grooming either. A bath once in a while and some brushing is sufficient.

The Boston Terrier is so called because the breed was actually bred first in Boston. This terrier is the result of breeding of a terrier breed and a bull dog breed. It all started with a dog name Judge who was of terrier English Bull Dog lineage. Judge was bred with a french terrier and the result was the “new” Boston Terrier.

Boston Terrier’s are relatively hardy animals but they do have some genetic predispositions which may cause concern. They are prone to both adult and juvenile cataracts. They are also prone to heart murmurs, allergies, luxating Patellas and mast cell tumors. They can not tolerate extreme temperatures well because of their shortened snout.

They can suffer from a dry eye condition which can be easily rectified with eye drops. The luxating patella condition is typically genetic and it is estimated that over 60% of Boston Terriers are prone to the condition.

They are also known to have finicky digestive systems so it is very important that they have a well balanced diet. They frequently have a bout of reverse sneezing which can cause them to sound as if they are choking this too is relative to the length of their snout. Rubbing the neck and ease this behavior.

Good health is largely reliant on responsible breeding and diet. Overall the Boston Terrier makes a great addition to any household and the onset of disease is not common. Relying on a good breeder is one of the best ways to insure that you choose a puppy that comes from a line that has managed to avoid some of the genetic pitfalls. 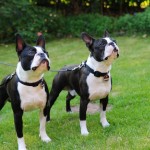 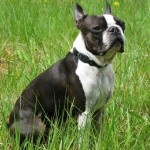