"Boxers are suspicion of strangers, and their alertness, agility, and strength make them formidable guard dogs. But they are also lively and friendly making them popular family dogs as well."

Other names for this breed:German Boxer, Deutscher Boxer

Coat:Short-haired breed, with a shiny, smooth coat that lies tight to the body.

Color:Fawn or brindle, black mask, with or without white markings, and white.

The Boxer is a well established German bred dog. The first Boxer was shown in 1896 in Germany. It is a cross between an English Bulldog and the now extinct Bullenbeiser. The breed is a medium sized short coat dog that is classified in the working class of dogs.

They are barrel chested and have a discernible under bite. The head shape of the boxer is its most prominent feature. Docking of the tail and ears was a very commonly accepted practice worldwide but is now prohibited in many different countries around the globe.

Boxers have short coats that lie flat on the body. They require very little formal grooming and can get by with a monthly washing. In between baths than can be wiped down with baby wipes to keep them smelling good. They shed twice a year but it is minimal because of the length of the hair and the absence of an under coat.

Many people mistakenly believe that all white boxers are rare. The reality is all white boxers make up about 25% of the population. Unfortunately white puppies of this breed are rare because breeders up until the late 1990’s would euthanize them. White boxers have a higher incidence of deafness and skin cancer and the theory was that selling a dog or breeding one that has known defects was not in line with the reputation that breeders wanted to present for the breed however with pressure from kennel clubs and other organizations the practice has been abandoned.

The AKC colors that are recognized are brindle and fawn which can result in an array of color combinations. An interesting fact is that pure bred Boxers do not carry the gene for an all black coat so there is no such thing as an all black Boxer! This breed may have black markings and may even be black and white but they will never be all black if they are than they are mixed with another breed.

Personality is really were this breed shows what a winning breed can do. They are very loving and great with children making them an excellent family pet. They are very protective of their family as well. They are easily trained thanks to their high level of intelligence and the fact that they were originally bred to be working dogs. They are very eager to please and work hard to get their people’s approval.

Training a Boxer is best done with positive reinforcement techniques as they do respond best to that training. They require an adequate amount of exercise and stimulation so they do not adopt some of the behaviors that are associated with a dog of this breed like licking, digging and chewing.

They have to be engaged to keep their spirits up! They make great companions and watch dogs. They get along with other dogs but can get a little frisky with bigger dogs of the same sex. They are watchful of pets that are smaller then they are and show a nurturing side that most other dogs do not display when it comes to children in the family.

This breed can easily adapt to any type of housing. They require exercise at the level that any other breed requires. They are medium build so they do not require tons of space to roam around. They enjoy the company of people so it is important that they are completely integrated into the family for an optimal lifestyle.

They are very well known for not being able to tolerate high heat and humidity so they should never be left outdoors in the heat.

Boxers have some unique health issues. For example Boxers are up to 3 times more likely to contact a form of cancer. They are also prone to heart disease. Bloat and other digestive issues may also arise. They may be prone to epilepsy as well.

In most dogs the overall health is good. The best way to insure a healthy dog is to look to the parentage. With good breeding practices most of the genetic predispositions can be easily controlled. A nutritious diet, exercise and regular health checks can help to catch any problems that should crop up.

This is a great family dog. They are also excellent guard dogs because they alert well and are powerful. As a testament to their interest in being well trained this breed is often used as seeing eye dogs, search and rescue dogs, military companions and in police work. 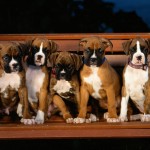 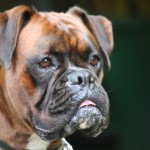 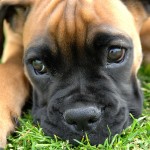