Other names for this breed:Doberman

The Doberman Pinscher is a breed of dog that is large sized and square build. It has a long thin snout and a muscular body. There is no standard weight for this breed other than recommendations that the breed is kept at a weight that does not impede agility.

The ears are normally cropped so that they are erect on the top of the head. In Germany where the breed originates cropping is no longer allowed.

The Doberman Pinscher was originally bred as a guard dog which meant that controllable aggressive traits were a primary focus. Many people have fed into the “aggressive breed” rumors. The Doberman is an aggressive breed but also a very trainable breed. The use of aggressive behavior is typically reserved for clear dangers to the home, human companions or self.

This is a highly intelligent dog that is easily trained. Many breeders have worked to breed out some of the aggressive tendencies to result in a more family friendly version of this breed. It is a very alert, noble breed that looks to please its human companions.

Overall the Doberman is not aggressive without provocation. It can get along well with other household pets.

This is a large dog that may not be well suited for apartment living because of its size. Its short haired coat requires little attention. This breed does not regular exercise and stimulation because of its high level of energy and intelligence.

They can show signs of aggression towards strangers so a city setting is not the ideal setting for this breed. They require active exercise daily which can include walks, games of fetch and running around the yard.

Doberman Pinschers can suffer from a full range of genetic disorders some that are serious and some that are simply an annoyance. They can have heart disease, a bleeding disorder, cervical vertibral instability which can all result in fatality. On the other end of the spectrum that will not result in fatality Dobermans are prone to hip dysplasia, prostatic diseases and canine obsessive compulsive disorder.

The heart disease is most serious and results in a very high morbidity rate.

The Doberman Pinscher was bred by Karl Louis Doberman in Apolda Germany in 1890. Mr. Doberman was the tax collector and the master of the dog pound, his goal was to create a breed that could protect him during his tax collection. It is not clear as what ratio of what breed was used. The Doberman Pinscher is a combination of Rottweiler, Greyhound, Great Dane, Weimaraner, German Short Haired Pointer, Manchester Terrier, Old German Shepherd, the Beauceron and others. 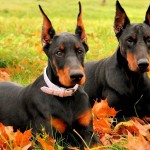