Other names for this breed:Bulldog, English Bulldog, British Bulldog

Weight:Male around 50 pounds, female around 40 pounds

The English Bulldog is a compact dog that is muscular and medium sized. This dog has an under bite, large jaws, and an abundance of skin around the face which gives it a wrinkled look. The color of this breed ranges from solid white to a reddish brown and is often a combination of colors. The ears are set back on the head and the eyes are deep set.

It is barrel chested which gives it “body builder” stance. The most prominent features of this dog are its squat medium build AND massive unmistakable jaws.

This breed is mostly referred to as just “Bulldog”, but sometimes also called the “British Bulldog” or “English Bulldog”. It’s not to be confused with French Bulldogs or American Bulldogs. English Bulldog originated in the British Isles and got its name from its appearance as a little “bull” and also because it was bred initially to “work” the arena with a bull. It was ferocious in its attack of bulls in the arena. The practice was outlawed in the 19th century but the breed while losing it ferocity has maintained its “stick to it” attitude which fuels its reputation as being a bit stubborn.

The English Bulldog is a “bully” breed which are well known for being a bit stubborn. Largely it depends on the dog but they can be a little bit stubborn when it comes to training. There are also some members of the breed that will challenge for the alpha spot so a little tough love goes a long way with the breed.

They are loyal dogs to their family and will chase off intruders. They are very good with children. They are not very active dogs as adults. As puppies they can be energetic but quickly outgrow the need for extra exercise. They make great family pets but may have an issue adjusting to other dogs. They can be a bit combative when it comes to other dogs if they are unsure of their place in their own pack.

Bulldogs have wrinkles or “folds” in their skin that require special care. They have short coarse hair which is easy to care for. A good brushing and wiping down with a wash cloth will help to keep their coat in good shape. The folds around their faces need to be cleaned with a wash cloth and then dried off because they are prone to fungus infections that build up in the folds if they are left damp.

The English Bulldog is an ideal companion for apartment dwellers because they are relatively calm and sedentary. They do need regular walks. They can not be left outside for long periods of time because they are prone to heat stroke. They also have difficulty adjusting body temperature in the cold so they are absolutely inside dogs.

The Bulldog is commonly diagnosed with knee and hip problems that are typically genetic. They also are prone to breathing issues, cherry eye and developing tumors. The skin infections as mentioned earlier can be prevented while the other health concerns are usually genetic and can not be prevented. 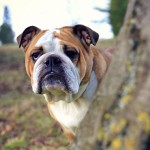