"Cockers don't like being alone, and will bond strongly to an individual person in a family, typically the one who feeds it"

Other names for this breed:Cocker Spaniel

The English Cocker Spaniel is a “gun dog” bred initially as a hunting dog. The history of the Spaniels can be traced back over 500 years. The modern English Cocker Spaniel was historically broken into two groups: the water type and the land type. In the early breeding days it was not unusual for one litter to produce both Cockers and Springers!

They also historically had docked tails to about 4-5 inches but docking has been outlawed in many countries although still permitted in North America for show purposes and other countries once it has been proven that the dog is a “working” dog and will be used for hunting purposes. They have long lobular ears that when pulled forward come slightly past the tip of the nose.

They are short well built dogs that have very expressive faces and round eyes. They weight between 29-32 lbs at adult weight. It is one of the few breeds where the adult weight does not differentiate between male and female. They are approximately 15-16 inches at the withers in height.

The Cocker has a double coat. One that is dense and close to the skin to aid in water proofing and as a defense against the climate and the other a silky long outer coat. Grooming of the ears and long hair is especially important to offset the possibility of mats forming which can be painful for them to be removed.

Regular bathing is also suggested to keep down debris in their coat.

English Cockers that are of the “field” variety come in a full range of colors and color combination. For show there are some very restrictive color requirements. For example a show grade dog can only have a white patch on the chest and no where else if they are to be considered a solid or single color.

The colors of the Cocker ranges from liver, brown, black, red and combinations of the same.

The English Cocker Spaniel is genuinely a nice dog. They have a great personality, love to be involved in a human family and get along great with children. They have a strong working dog drive and enjoy a good challenge. They are considered to be of “excellent working ability and obedience” and ranked as very intelligent among dogs.

They have a happy go lucky attitude and are very loyal. They usually pick one family member that they call their own and than play with everyone else. They get along with other pets and with the right socialization can live in harmony with adults, children, other pets and basically anything else that comes a long.

They are exceptional companions because of their good nature and personality. Its nickname as the “merry cocker” says it all. They have a constantly wagging tail and never met someone they did not like. They are not very good guard dogs or watch dogs because they easily make friends with everyone. They can be a bit nervous around loud noises so it is important that dislike is respected. It is a bit odd that a dog bred for hunting should be easily startled by loud noises but they are.

These good-natured dogs can live anywhere a human lives. They are very open to any type of living arrangement. These are laid back dogs so they are great for apartment living as far as barking at other tenants. They are working dogs so they do need a decent amount of exercise and play time to be perfectly content.

The number one leading cause of death among this breed is old age! They are well known for living long healthy lives that span about 13 years. Of course 13 years is an overall average and many have long surpassed that marker.

There is about 6% of the population that will lose their hearing due to genetic imperfections but most are able to compensate the loss by learning to read body language and respond to hand signals. There are not many genetic conditions that Cockers are prone to.

There is a very rare Rage syndrome but can affect English Cocker Spaniels, and this syndrome seems to be connected to the color of their coat. Rage Syndrome is only seen in show cockers that have either solid red or solid gold coats. This syndrome seems to come on suddenly and is so out of character with these dogs that it is simply astounding to anyone that witnesses the behavior. Witnesses have reported that the dog will get a glazed look to their eyes than randomly viciously attack people and other animals.

Cockers are compassionate, determined, kind, intelligent, athletic, alert and resilient dogs which make them great family pets. The breed is well known for being a loving companion! 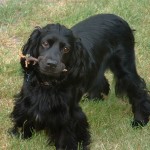 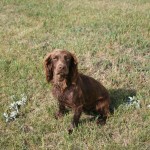 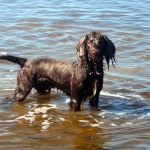