"Old English Sheepdog puppies are born with a black and white coat, and more common grey or silver shaggy hair only appears after shedding."

Height:Height at the withers is at least 61 cm (24 in), with females slightly smaller than males

The Old English Sheepdog is recognized most easily because of their very long coats. So long, in fact, that it usually covers their eyes and face. Believe it or not, these dogs, which move with a distinctive bear-like lumbering motion, were used for herding sheep. Hence their names. Despite their working class roots, Old English Sheepdogs are probably one of the sweetest breeds you will ever meet. Some even describe them as bubbly! To learn more about them, read on.

The origin of this breed is not entirely known. Many just associate them with shepherd dogs that were used in the UK. It is thought that they might be related to the bearded collie, and/or the Russian Owtchar. The first depiction of one of their ancestors may have been in an English painting in the early 1770s. Around 100 years later, these dogs were being formally shown in the ring. The very long coat made it possible to elaborately style and groom their hair. You will still see that they are very popular show dogs, as well as companions.

As mentioned above, the most distinctive thing about this dog is most likely its long, shaggy coat. Most of them have coats that are both white and grey. The long hair makes their ears heavy, and they lay against their skulls. The tail is long and hangs down. In some areas, the tail has historically been docked for show. This is still the case in places where docking is not illegal. When the dog moves, you will notice that Old English Sheepdogs stand higher at the rear than at the front shoulders. Males are a bit larger than females, and can weigh over 100 pounds!

Old English Sheepdogs are herders at heart. With that being said, be aware that they often do try to herd objects or children. Despite that, many owners appreciate just how playful, clown-like, and laidback their Old English Sheepdogs are. You will find them to be very intelligent, and also social animals. They learn things fairly quickly, and are highly adaptable to their surroundings and environment. Just understand that this breed needs attention from its owners. You must give it enough to do both physically, as well as mentally.

Possible Fun to Have with Your Old English Sheepdog

As mentioned above, keeping your Old English Sheepdog occupied is very important. So how can you do it? You may want to seek out agility contests for your dog. Herding contests are yet another competitive outlet for your dog’s natural instincts. Tracking, and flyball are other popular options with this breed. If you feel that your dog is extremely obedient, they you might want to try obedience or rally obedience competitions. Just teaching them how to fetch and playing that with them often can be great.

Give your Old English Sheepdog lots of room to roam, if possible. If not, then be sure to give them lots of exercise and playtime every day. Understand that the long, beautiful coat of this breed takes some serious upkeep, up to four hours each week! You must brush and comb it, often. Give them a bath every 6 or 8 weeks or so. In the hot months, try to do some of your playing and exercising indoors, if possible, as this breed may overheat because of their coats. Be careful until they reach the mature age of two that they do not play on very hard surfaces, like asphalt and concrete.

Like many other working breeds, the Old English Sheepdog is pretty hardy. Just be aware that they can suffer from this like an underactive thyroid, eye diseases like cataracts, and deafness. Hip Dysplasia can also be an issue with this dog. Be sure that your Old English Sheepdog comes with papers to show that their parents were free of this issue. Brush your dog often, and all the way to the skin to remove any other dirt that you cannot see. Not doing so can result in matting. Matting can, eventually, lead to some skin issues with this breed.

Getting Your Own Old English Sheepdog

If you really want to experiment with dog grooming, then you might just want to raise an Old English Sheepdog of your own. There are plenty of trusted breeders and kennels that offer this breed. Just be sure that any puppy you purchase from such an operation comes with all the proper paperwork. The Old English Sheepdog Club of America is a great club that you can turn to if you are looking for dogs of this breed to adopt from rescues. Before you adopt or purchase this breed of dog, understand that they will require much grooming, playtime, and attention. 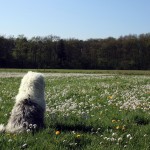