The Shetland Sheep Dog is of the working breeds. They are often referred to as Shelties. They are small to medium in size and were originally bred to heard sheep. They look like small Rough Collies. They stand at about 13-16 inches at the shoulder. They weigh between 11-25 lbs at their ideal weight.

They have long pointed snouts with dark eyes that can also be blue in the Blue Merle coats. They have a double coat. A thick undercoat to help protect against the weather elements and long guard hairs. The coat color ranges from Gold to Mahogany. The Blue Merle is a genetically black coat but is the only color coat that has blue eyes all the other colors should have brown or black eyes.

The Shetland Sheep Dog is a highly intelligent dog that is easily trainable. They are very willing to please so training is as simple as providing verbal praise for a job well done. They are very alert dogs which makes them excellent watch dogs.

Shelties can become destructive when they are not exercised enough. They are conducive to new commands and can easily accept new training at any age. The key to a happy Sheltie is exercise and attention. This is a high energy breed.

While they are a small breed they likely would not do well in an urban environment they are bred for a heightened awareness that is useful in herding animals but not so great for the sights and sounds of city living.

Their need for a great deal of exercise makes them an ideal candidate for either rural or suburban life in a back yard. They require brushing often as that dual coat can easily mat. They also require interaction. They are intelligent and need someone to recognize their intelligence and challenge them.

The Shetland Sheep Dog looks almost exactly like its relative the Rough Collie but unlike other mini’s that are often just the result of selective breeding of the larger dogs the Sheltie is actually a cross breed of several different dogs. The likely most distant relative being the Spitz. There are elements of the Pomeranian, Spaniel and other breeds that are present in the Shetland Sheepdog (originally called the Shetland Collie).

For the most part Shetland Sheepdog is a hardy breed that displays only a few genetic concerns that can lead to illness. The biggest of the concern is that 15% of Shelties carry the MDR1 gene mutation which can make them prone to negative reactions of certain medications. Other genetic issues include “collie eye”. Dermatymollitis is also a genetic issue to look for it is often diagnosed as mange because the hair on top of the head is the first place this disease is evident however this disease when left untreated can cause severe damage to the nervous system in resulting in the dog having to be put down. 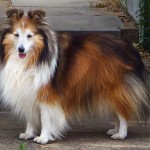