"Weimaraners have an excessive amount of energy that requires a good outlet. They have a very strong desire to work and live with their owners."

Coat:Short coat easy to maintain, and no undercoat. Can also be long-haired but it's less common.

The regal Weimaraner may sometimes be mistaken for a smaller greyhound. However, these gorgeous dogs are in a class (and breed) all their own. For years, the Weimaraner has been used as a hunter and a companion animal. Here, we will tell you a bit more about this lanky, wiry, and charmingly athletic dog. We will tell you what they look like, as well as their origins. We will also help you to better understand how this breed behaves. Lastly, we will tell you about the best practices for caring for a Weimaraner.

Just like many other hunting dogs, the Weimaraner was often used by European royalty, dating all the way back to Louis IX of France. Dukes, Kings, and Princes often took these dogs on hunting trips for large game. Later, they were used to hunt smaller game, at which they were equally successful. Some think that the time spent so constantly around families in this time period hardwired a need to be close to human companions in this breed. It probably was not until around the 19th century that the first Weimaraner dogs were imported into the US for breeding.

These dogs are recognizable almost immediately because of their extremely slim and muscled appearance. You can expect them to be 25-27 inches tall. Despite this, they will not usually weight any more than 80 pounds. Females are a bit smaller than males. Commonly, the Weimaraner has a shade of grey as the color of their short coat. They can be long haired or short haired. Look for eyes that are light in color. In some countries, the tails are docked and are less than 6 inches. In other places, they are left whole. The skin beneath the coat will appear pink, not black.

Weimaraner dogs are known to be fast and alert, traits needed for successful hunting dogs. Their muscles, as one could imagine, makes them quite strong. Just like other working class dogs, they are also extremely intelligent. In some cases, Weimaraners might appear to be a bit aloof. But despite this act, they truly love human company. Some Weimaraners actually suffer from separation anxiety pretty badly. If they are left alone for long periods they may try to escape their confines (not even stopping at injury) or do things that could destroy property.

Hunting breeds need their exercise, so be sure to give your Weimaraner lots of space to roam and exercise them very often. They can be kept in apartments, but not outdoors, exclusively. Due to their high intelligence, this breed can often get bored easily with typical training. Be sure to mix it up for their benefit. Being a true leader to your Weimaraner is not a bad thing. They need it! The coat of the Weimaraner does not need very much grooming, though a regular bath can be a good thing. Do not feed them once a day, as they are prone to bloating. Instead, try several smaller meals after cooling down from exercise. 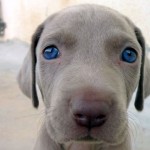