"Dachshunds are one of the 10 most popular dog breeds in United States."

The lovable wiener dog more correctly known as the Dachshund is a lively German hound dog that was bred to hunt ferocious badgers. The smaller mini’s were bred to hunt smaller game like rabbits and other small critters. Their name translated from German literally means “badger dog”.

The Dachshund’s long body and short legs made him the perfect opponent for the badger. They were able to dig into the burrow quickly and reach deeply into the burrow to retrieve the badger thanks to their slinky like body.

Some experts believe that this breed dates back to early ancient Egypt because there is evidence of cave drawings that replicate these unique looking dogs. The first official mention of the Dachshund was in the middle 18th century before their official name emerged they were referred to as Dachs Kreicher (badger crawler) or Dachs Krieger (badger warrior). There is also some evidence of the Dachshunds existence before this period but they were referred to as “hole dogs” or “badger dogs”.

There are three sizes that are universally accepted. The standard and the mini size is accepted worldwide but the “rabbit” size is not accepted in the US. The standard size can weigh about 16 pounds while the mini typically weighs 12 pounds and under. The rabbit size is around 8 pounds.

They typically do not do well with children or other animals although there is an exception to every rule. They love to chase small animals, balls and basically anything else that moves. They are also considered willful and a bit stubborn when it comes to house training.

Their willfulness comes in handy though when it comes to protecting those they love. They can be ferocious watch dogs that will do their best to intimidate strangers. They have no known fears which include larger dogs.

Dachshunds that are indulged can become snappy even with their handlers. They need consistent training and obedience.

Training to be groomed early in the puppies life is important with this breed to make handling easier down the line.

This breed comes in a full range of colors. They can have single coat colors be dappled or have dual coat colors. All black Dachshund’s can be found but they are considered not within the range of the ideal coloration recognized by most of the kennel clubs.

This is a small breed of dog that can live anywhere humans live. They can thrive in apartments in urban areas and in houses in rural or suburban areas. They are burrowers so they like a good blanket to crawl underneath to sleep.

They require a moderate amount of exercise. They love to run and chase so a couple of hours a week spent throwing a ball around will help them sate that side of their personality.

The Dachshund’s long back is prone to health problems. At a fairly high rate disc’s can slip and cause temporary paralysis. Typically treatment includes anti inflammatory drugs and crate isolation for a few weeks.

Avoiding back issues requires that jumping from high range is discouraged and rough play with other dogs is also discouraged. About 25% of this breed will experience some back problem in their lifetime. They also can suffer from hereditary hearing loss and blindness to different degrees. Typically the double dapples are more at risk for a skin disorder than can cause the hair to fall out and extreme sensitivity to the sun.

This breed is also two and a half times more likely to develop heart disease than any other breed.

These are interesting dogs that with the right training can be a lot of fun to have in the home. They are full of personality and can easily win you over. If a Dachshund loves you, you will never have another love like it.

When they choose their people it is a choice that they stand by and make the choice for life. They are very loyal to their people and with the proper training can make excellent companions. 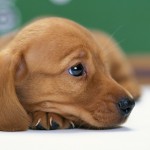 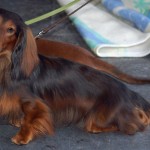