"The natural instinct to hunt may result in the dog hunting alone and sometimes bringing home occasional dead trophies, such as cats, rats, pigeons and other urban animals."

Weight:Healthy weight should permit the last two ribs to be felt under the coat and the dog should have a distinct waist or "tuck-up".

Coat:Short and flat with a dense undercoat protected by stiff guard hairs

Life span:Average 9 years, with some living even 15 years or more.

The German Shorthaired Pointer is a hunting breed that was developed in the 19th century. It has a tail that stands out straight when it spots game hence the “pointer” in the name. The tail was commonly docked but is now prohibited in most countries. Its coat is short and smooth. The German Short Haired Pointer has short floppy ears a well defined snout that is long and broad which allows for the retrieval of game.

As in all hunting breeds the toes are webbed. The coat has a thick under coat with guard hairs that allow the retention of warmth and act as help when the dog swims. The color of the coat ranges from liver to black with some points of white. The American Kennel Club only recognizes the liver color as the correct color of the breed.

The eyes are always dark, lighter colored eyes than brown are considered a defect.

The exact history of the German Short Haired Pointed is not known. Most experts agree that this breed is likely a descendant of the Spanish Pointer and the Old German Bird Dog. It is also believed that other German breeds have had their hand in developing the breed like the German hound breeds. The first stud book was created in 1870 so while the breed existed before that point there is no absolute lineage indicating what other breeds contributed to the creation of the breed.

These are high energy dogs that are bred to hunt and as family companions. The hunting, companion traits make these dogs highly trainable. They are affectionate and confident dogs that have a considerable amount of energy to disburse. They love to swim and make excellent dogs for active families.

Training and socialization as puppies is a must because they have been known to show aggression to humans and other animals when not properly trained and socialized. Overall they can be trust worthy pets for an active family.

They are bred to hunt so small family pets may be in danger unless proper training takes place to help the breed distinguish what is hunt worthy and what is not. They typically get along well with other dogs.

The German Shorthaired Pointer is not a good apartment dog because they need quite a bit of exercise to stay happy. They can become destructive when they do not get enough exercise. They need a place to run around (like an enclosed backyard). They like to swim and chase.

An ideal setting for this breed is in a house with a yard and a family that wants to spend time exercising the dog. They require little care beyond a brushing once in a while. They constantly shed which may be a problem for people with allergies.

The German Short Haired Pointer is a hardy breed with minimal genetic health concerns. They are prone to ear infections, bloat, hip dysplasia but for the most part are very healthy dogs. 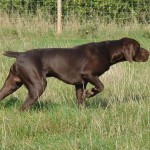 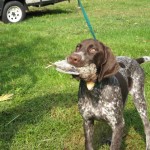